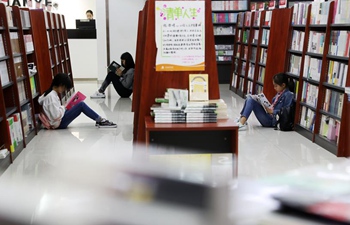 In celebration of the World Book Day which falls on April 23, the Chinese Cultural Center in Cairo held on Monday its fourth reading salon under the title “Travelling and Poetry.”

Toward the start of the event, a short video clip introducing Chinese tourist attractions and natural landscapes was displayed, winning admiration from the audience.

Amid the salon, many reading and literature lovers delighted in verse exhibitions by both Chinese and Egyptian participants.

Eminently, the audience at the theater of the cultural center gave a overwhelming applause to two Egyptian youngsters who performed Chinese songs.

“Every year, the Chinese Cultural Center celebrates the World Book Day with our Egyptian friends and this is our fourth year in a row,” Shi Yuewen, cultural counsellor of the Chinese Embassy in Egypt, said during the event.

Such occasion enables the Egyptians get closer to China and its history, culture and literature, Shi added.

“Like Egypt, China has a long history, natural landscapes and unique traditions … We want the Egyptians to see this through our salon,” the Chinese counsellor noted.

First celebrated in 1995, World Book Day, otherwise called International Day of the Book, is a yearly occasion composed by the UNESCO to promote reading, publishing and copyright.

Amid the occasion, Egyptian and Chinese readers get the opportunity to pick a large number of Chinese books that were placed on tables at the center’s theater.

The occasion achieved its climax when Chinese ping-pong experts gave a speedy exercise to Egyptian guests on how to play the ball.
“I was scared before I went on the stage to read the poem, but the good reactions of the Chinese audience encouraged me,” he added.

At the end of the salon, the Chinese cultural counsellor donated 500 books to the Chinese Language Department of Egypt’s Kafr al-Sheikh University.

“The Chinese books will definitely help our students,” Wafaa Darwish, a professor of Chinese language at Kafr al-Sheikh University, told Xinhua. “These books are rare and we cannot find them easily in Egypt.”

Toward the finish of the salon, the Chinese social instructor gave 500 books to the Chinese Language Department of Egypt’s Kafr al-Sheik University.

“The Chinese books will support our understudies,” Wafaa Darwish, an educator of Chinese language at Kafr al-Sheik University, told Xinhua. “These books are uncommon and we can’t discover them effectively in Egypt.”

Since the upgrading of relations between China and Egypt to a comprehensive strategic partnership in 2014, cultural exchange has been at its peak as demonstrated by frequent mutual visits between artists as well as cultural and musical delegations.

Both countries hope to boost friendly ties through the Belt and Road Initiative, which has promoted deeper understanding between them.