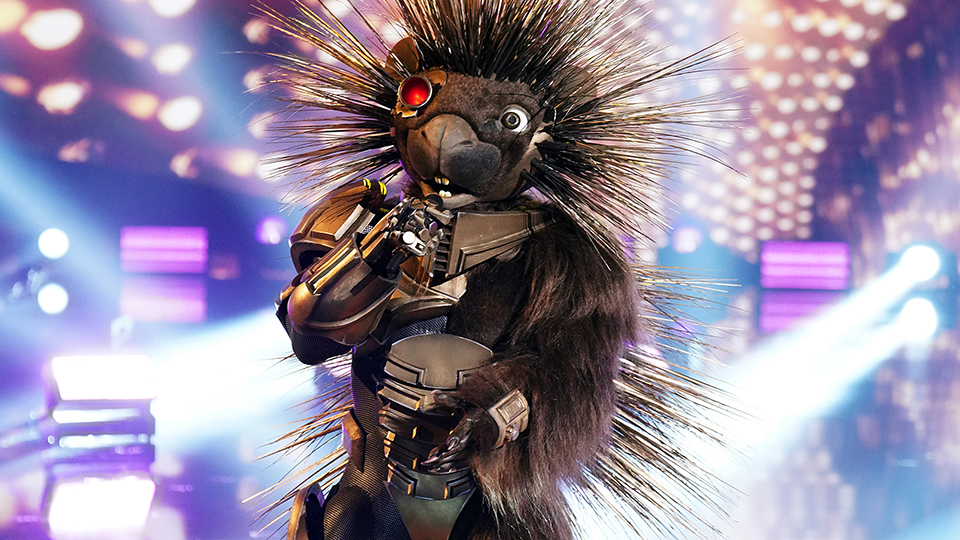 Tyrese Gibson might be perhaps the most competitive contestants to at any point show up on “The Masked Singer.” How dedicated would he say he was to the show’s guessing game? He as often as possible tossed out incorrect clues, claiming to be 30 years older or hailing from Central America.

“I personally tried to throw as many people off as I could with my backstory,” he said. “I said I was 60 years old, I said I had two grandkids and I was from Costa Rica. And so I was trying to throw a haymaker in there and really throw people off.”

Gibson was the latest celebrity to be eliminated from “The Masked Singer,” as he was exposed on Wednesday night’s scene as Robopine. Yet, the actor and singer likewise admitted to being bit disappointed that one particular clue perhaps with a lot of his character. On the current week’s episode, the demise of Tyrese’s “Fast and the Furious” co-star Paul Walker was insinuated in the clip package.

“My fans and supporters, they know a lot of details about my life,” he said. “Because I’ve written two New York Times bestsellers. I went into all of my childhood traumas and all the things that I had to survive growing up in South Central LA. And I said, unfortunately, if you start asking me questions trying to hide this and hide that, a lot of my fans are going to hear these questions, and they’re going to know that it’s me. The goal here is to have everybody guessing, who is Robopine.

“I didn’t necessarily want them to talk about things that are so obviously connected to me,” he added. “I wanted them to go as far as they could to not have any clues and hints where people would be able to put two and two together. If you say you had a really close friend that passed away, your co-star/movie star, they’re gonna be like, ‘Well clearly, it’s Tyrese.”

Gibson credited his daughter for the motivation behind why he consented to do “The Masked Singer.” He made up for lost time with the show during the COVID-19 isolate, and proposed to her dad that he ought to think about the show.

“I told her, ‘No, I don’t think I would ever do that,’” he said. “Then four months later, I got a phone call from my agent. And he said, hey, we just got an offer for you to do to ‘The Masked Singer.’ They were like, ‘We know you’re not gonna do it, but we have to tell you about all the offers that come in.’ I said, actually I want to do it. I think I’ll end up being a super cool dad. And it happened. I actually was surprised that I made it through as many episodes as I did.”

Gibson said he was particularly satisfied with how the show stayed quiet about the mystery of his appearance under wraps. “I mean, they arranged for me to be picked up in a secret parking lot,” he said. “They went far.”

Gibson performed “Water Runs Dry,” by Boyz II Men for his last tune; before that, he had sang “Never Too Much,” by Luther Vandross; “All of Me,” by John Legend; “Killing Me Softly,” by Roberta Flack; and “Let’s Get It On,” by Marvin Gaye. Next up, he was planning on tackling a Teddy Pendergrass tune.

“They’ve literally created a world within a world,” Gibson said of “Masked Singer.” “And, it’s really beautiful to see that they have such a well-oiled system in place for what they’re doing. I would do it again. I would definitely encourage my friends to do it.”

New this season is the contestants superstar “Cluedle-Doo,” who has been offering extra clues about every competitor. A week ago was the first uncover toward Cluedle-Doo’s character: “I have a connection to another mischievious Masked Singer from the past: The Gremlin.” (That was Mickey Rourke, unmasked in Season 4.)

The show’s specialists are additionally once going after a “Golden Ear” trophy dependent on their initial feelings of each covered entertainer (which McCarthy won last time). Jeong and McCarthy Wahlberg each had two focuses heading into this episode.

For Robopine, Scherzinger, Jeong and McCarthy Wahlberg all speculated Jamie Foxx. Thicke speculated Ginuwine. Nobody got another point.

Here are the remaining contestants and what the performed on Wednesday’s episode, “The Spicy 6: The Competition Heats Up”:

Song: “It Takes Two,” by Rob Base & DJ EZ Rock
Clue package voiceover: “I’m really just a family Yeti. When my daughter was born, I dropped everything to be the first to hold her. It was so important to me because my nana was the first to hold me, and we have an unbreakable bond. I didn’t find purpose in life until I became a dad. My children are always pushing me to be bold.”
Mind Reader clue: Corn on the cob. “Corn popped into my mind.”
Panel guesses: Jason Derulo, Vin Diesel, Trey Songz, Miguel
Previous songs: “If It Isn’t Love,” by New Edition; “Lonely,” by Justin Bieber and Benny Blanco
Previous panel guesses: Ray J, Justin Bieber, Taran Killam, Todrick Hall, Justin Timberlake, Omarion, Mario

Song: “Against All Odds (Take a Look at Me Now),” by Phil Collins
Clue package voiceover: “This may be super random, but I’ve got a super embarrassing story that I’ve tried to keep hidden. Back in my fraternity days, my bros and I decided to shave our heads in unity, right before the party of the year. Well, that’s when I found out I have a huge birthmark on the side of my head shaped like an apple. Dude. I had no idea. Then, I run into the sorority girl of my dreams, and she says, you really need hair. But look, it all worked out. I found my dream girl, who loved me and my apple head.”
Mind Reader clue: Cluedle-Doo’s Clue: “I’ve been following this guy’s career since he caught touchdowns from Dan Marino.”
Panel guesses: Ian Somerhalder, Taylor Lautner, Brian Littrell, Nick Lachey
Previous songs: “Speechless,” by Dan + Shay; “Good to Be Alive (Hallelujah),” by Andy Grammer, “7 Years,” by Lukas Graham, “The Pretender,” by Foo Fighters
Previous panel guesses: Adam Lambert, Charlie Puth, JC Chavez, Austin Mahone, Jonathan Knight, Zayn Malik, AJ McLean, Kevin Richardson, Lance Bass, Chris Pine, Adam Levine, Eli or Peyton Manning

Song: “Do I Do,” by Stevie Wonder
Clue package voiceover: “I’m finally having fun. I’m not afraid. As a little girl, I would put a hat out on the street and sing for people. I had absolutely no fear. I’m trying to channel that fearlessness now that I’m all grown up.”
Mind Reader clue: Mariah Carey. “For the record, I’m a huge fan of hers. Surpassing her record one time was one of the biggest moments in my life.”
Panel guesses: Kesha, Christina Milian, Mandy Moore
Previous songs: “Barracuda,” by Heart; “In My Blood,” by Shawn Mendes; “How Will I Know,” by Whitney Houston, “Use Somebody,” by Kings of Leon
Previous panel guesses: Anya Taylor-Joy, Camilla Cabello, Leona Lewis, Demi Lovato, Lindsay Lohan, Ashlee Simpson, Emily Osment, Victoria Justice, Brenda Song, Kesha, Demi Lovato, Becky G, JoJo

Song: “Shallow,” by Lady Gaga and Bradley Cooper
Clue package voiceover: “Even though it’s just the two of us here, I can speak for all of us when I say, when we first started, we never thought about putting ourselves out there like that would open us up to some pretty harsh criticism.” “Growing up, we were laughed at, even the way we looked was criticized. Haters are going to hate.” “We embraced not being the coolest, because we reached a lot of outsiders, just like us.” “Now we know it’s what’s inside that matters most.”
Mind Reader clue: Kangaroo. “Just like Kanagroo with its joeys, you never know how many of us are going to pop out.”
Panel guesses: Hanson brothers, Nickelback, Chad Kroeger and Avril Lavigne
Previous songs: “Man in the Mirror,” by Michael Jackson; “Wonder,” by Shawn Mendes; “Want to Want Me,” by Jason Derulo; “24K Magic,” by Bruno Mars
Previous panel guesses: Boyz II Men; Vanessa Hudgens; Darren Criss, Matthew Morrison, Kevin McHale or other “Glee” stars; Gwen Stefani and No Doubt guitarist Tom Dumont, Sugarland, Boyz II Men, Jacksons, Pentatonix, the Jonas Brothers, 98 Degrees, Red Hot Chili Peppers, the Jonas Brothers, Hanson, Boyz II Men

Song: “Put Your Hand Where My Eyes Could See,” by Busta Rhymes
Clue package voiceover: “The secret to getting it right is to do something that speaks to you. As a military kid, I always had to adapt moving city to city. I was good at making friends, but saying goodbye year after year, it really sucked. But it made me understand the importance of unity. And now I have a solid base that always has my back.”
Mind Reader clue: Old school shoes. “This clue should take you a step in the right direction. Or maybe the left.”
Panel guesses: Young Thug, Snoop Dogg
Previous songs: “Ride Wit Me,” by Nelly; “21 Questions,” 50 Cent feat. Nate Dogg; “Hip Hop,” by Dead Prez; “Regulate,” by Warren G feat. Nate Dogg
Previous panel guesses: Dwight Howard, Redfoo, Nick Cannon, Iman Shumpert, Dwyane Wade, 2 Chains, Waka Flocka Flame, Wiz Khalifa, Machine Gun Kelly, Kyrie Irving, G-Eazy