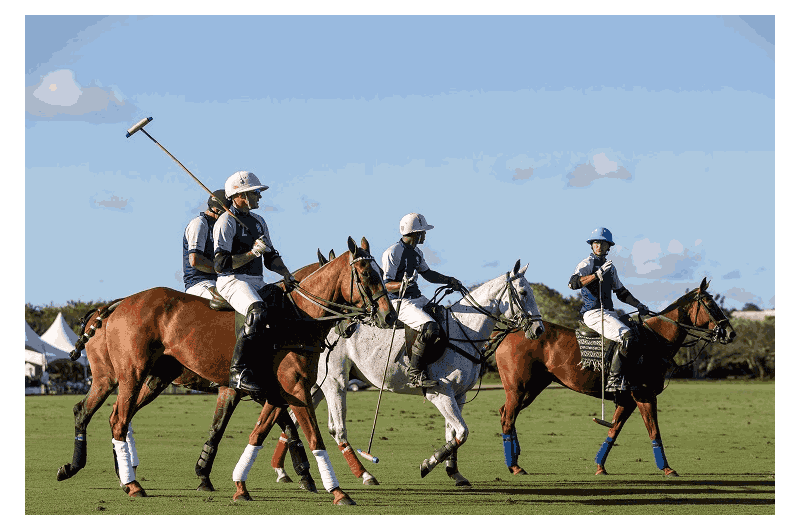 Thanks to two games played recently, is now confirmed who would be playing Monterosso and Next Generation in Thursday’s subsidiary semi-finals. The first match today saw Siri Bazzoni not only return to her MT Vikings team but score too. Their opponents were a higher-handicapped Polo Stud Schockemohle team. Looking for their first win in this tournament the German-based team were playing the four-goaler Charlie Hanbury in place of their patron Ekard Joules.

This new strategy appeared to be paying off in the early stages of the match, however didn’t work on the final minutes. They were 2-1 up after the first chukka and were 4-2 up in the second. Failing to score at all in the third was the turning point in this game. MT Vikings may have only added one further goal to their tally at half-time but the dynamics in this match had slightly shifted. MT Vikings levelled the scores to 5-5 in the fourth and not only pulled away in the fifth but managed to maintain that all-important one-goal advantage on the final whistle. This team performance has earned MT Vikings a date with Next Generation.

Segavas have secured a subsidiary semi-final game against Monterosso after beating Park Place Vaara at Coworth Park in a very intense match. Besides winning this match, this team also won the Gerard Leigh Trophy, presented in memory of a former Chairman of Guards Polo Club, Col William Gerard Leigh, a Chairman of the Club from 1955 until 1981. The match had looked as if this was going to be Park Place Vaara’s game. They arrived at Coworth Park fresh from a surprising win over Les Lions/Great Oaks and everyone wondered if they had now found their spark. It seemed they had in the first few minutes – leading 4-1 in the early stages of the second chukka.

Their game then stalled, while Segavas piled on the goals, taking the lead 6-5 at half-time. Park Place Vaara had not given up yet, remaining only a goal behind the leaders for the rest of the intense match. It was great to see such competitive play from both teams, the game was full of intense emotions and made it great for the audience to enjoy. Segavas will now play Monterosso in the second subsidiary semifinal. These two teams have already met in this year’s tournament, Monterosso coming out best last Tuesday. Segavas will be hoping to turn the tables on Alessandro Bazzoni’s team and win a place in Sunday’s subsidiary final, where the winning team heads home with the Cartier Trophy.

Who do you think will get the Cartier Trophy home? It is expected to be a very intense game, especially in the middle of a pandemic.

Both teams gave their best in the fields, but there is only one winner and Monterosso earned his place with hard work and practice. Now they have to prove themselves one more time for the prestigious Cartier Cup.

Brand Buzz
Previous Post: Netflix is testing a sleep timer feature on Android devices that quits streaming after set period
Next Post: Dunkin’ is providing with free hot coffee each Monday in February