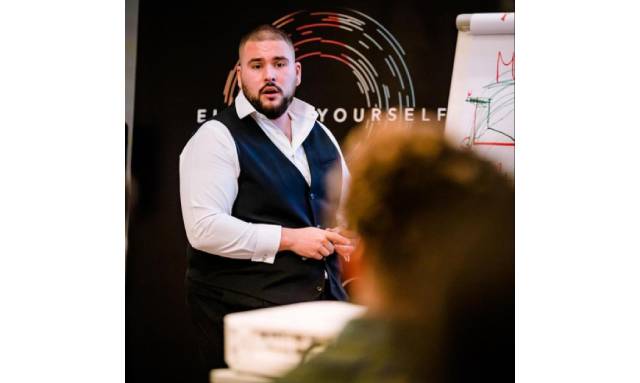 Björn Seiz has attained a global presence with his startup into blockchain and crypto space and has gained great momentum as a serial entrepreneur.

Until and unless one doesn’t work with a determined mind and heart, the dream to achieve great success can be far-fetched, believes Björn Seiz, aka O5O, a name that is gaining prominence each day in the ever-growing and evolving crypto and blockchain industry. This youngster from Switzerland has had his share of struggles and challenges on his journey, but his quest to become a successful entrepreneur helped him stay on his path exuding his unwavering vision powered with his relentless efforts. Today, his startup, which he originated in 2017, has grown to a level where it has attained a global presence with spreading its wings to several other parts of the world like Malta, Los Angeles, Hollywood, Dubai and other places.

What started a journey for this youngster at the naive age of 13 with selling clothes online took him deeper into the business world and helped him thrust forward to becoming a sought-after serial entrepreneur, while still being under 30. Below are a few proven habits that, according to him, can lead people to ultimate success.

• Always visualize your goals: This is one of the most important things to do in life, says Björn Seiz. Visualizing what one wants to achieve in life and writing it down on paper helps them translate all those visions into reality. It motivates people to take actions accordingly and be steadfast in making those efforts. People must envision their goals as if they have already happened, this will prime their mind to believe that the end goal has already happened; so when the time comes to perform, they ready and confident.
• Learn to accept a ‘No’: The ‘Yes’ process is a famous one where everyone yearns to hear a ‘yes’ in their business. However, Björn Seiz says that it is important to sometimes also learn to accept a ‘No’. Many people, who try to avoid a no for an answer, put too much pressure on themselves, which ultimately takes them to no success. He says that accepting rejections is also a big part of the Yes process. This will help people in handling a No much better and make them more prepared for success.
• Invest in yourself: When people love what they do, they can get nearer their visions and goals faster in life, believes Björn Seiz. To gain great success, the young entrepreneur says that people must know what they love and be courageous enough to take pertinent actions. Investing in oneself also requires determination and perseverance. Individuals can achieve anything if they set their mind to achieve their goals and are willing to face their fears or self-doubts.

Björn Seiz’s journey to ultimate success was only possible when he kept working incessantly for his goals and learned each day from the experiences he gained through his failures. This has today led his company to achieve worldwide success and get featured on many prominent websites as well. As a public-traded firm, his company is already on its way to achieving millions in the near future.

Brand Buzz
Previous Post: The Future of Math With Teach to One 360, an Adaptive Personalized Learning Solution
Next Post: Roman Shapovalov, an eminent role model to all the budding entrepreneurs who inspires them to never stop